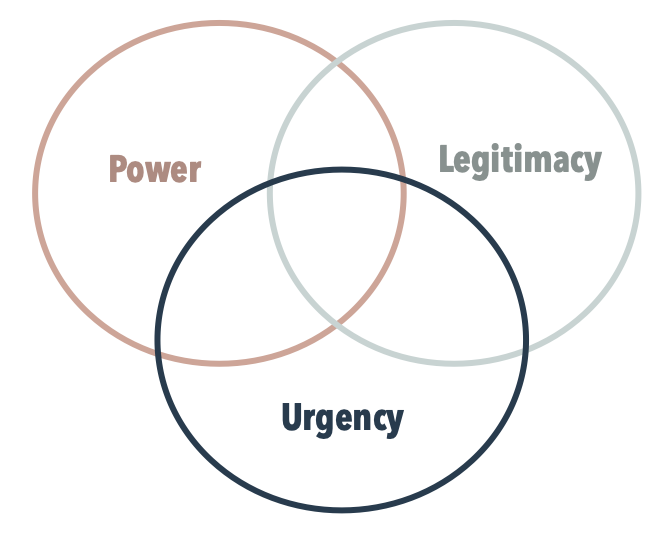 After an in-depth literature review, Mitchell et al. (1997) demonstrated how among the many definitions of the stakeholder concept, only two attributes were considered essential to identify a stakeholder – power and legitimacy. In turn, the authors argued that only taking into count these two attributes may lead to an incorrect or incomplete stakeholder identification, thus, suggesting that managers should also acknowledge the urgency of a stakeholder’s claim on an organisation.

Consequently, bringing to life the Theory of Stakeholder Identification. Logically, intends to define who should be regarded as a stakeholder, through possessing one or more of the three attributes:

Subsequently, by introducing managers’ perceptions, the authors elaborated on the Theory of Stakeholder Salience – “the degree to which managers give priority to competing stakeholders claims” (Mitchell et al. 1997:854). Fundamentally, this dynamic model was based on the following assumptions, regarding how a stakeholder can lose or gain salience to a manager:

As previously mentioned in another post (Stakeholder Theory Overview), the primary purpose of the theory is to help management decide which claims should be prioritised at a given time. Thus, establishing the conditions under which managers will identify an individual as a stakeholder while determining the level of priority to those stakeholder’s claims over others. In other words, a stakeholder possessing a higher number of attributes will be given priority over other claims.

As a result, seven stakeholder typologies were developed. 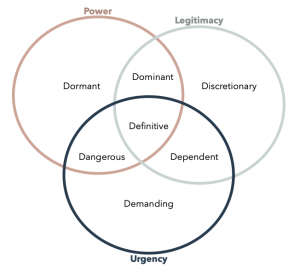 In turn, these typologies can be subdivided into three categories, briefly explained in the next table.

Six of the seven typologies lack either one or two attributes; the following table explains what a stakeholder lacked, and therefore, needs to become a definitive stakeholder. 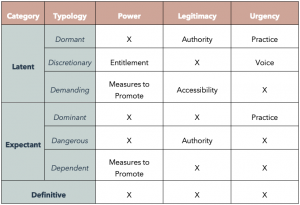 Overall, the Theory of Stakeholder Identification and Salience offers a model not only to identify ‘who and what really counts’, but also to uncover and predict some of the stakeholder’s behaviours. Therefore, being a useful tool, managers can use in their organisations to effectively and efficiently manage stakeholders.

I would recommend reading the article in full, as it contains the different typologies definitions. 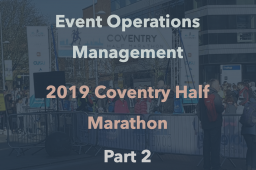