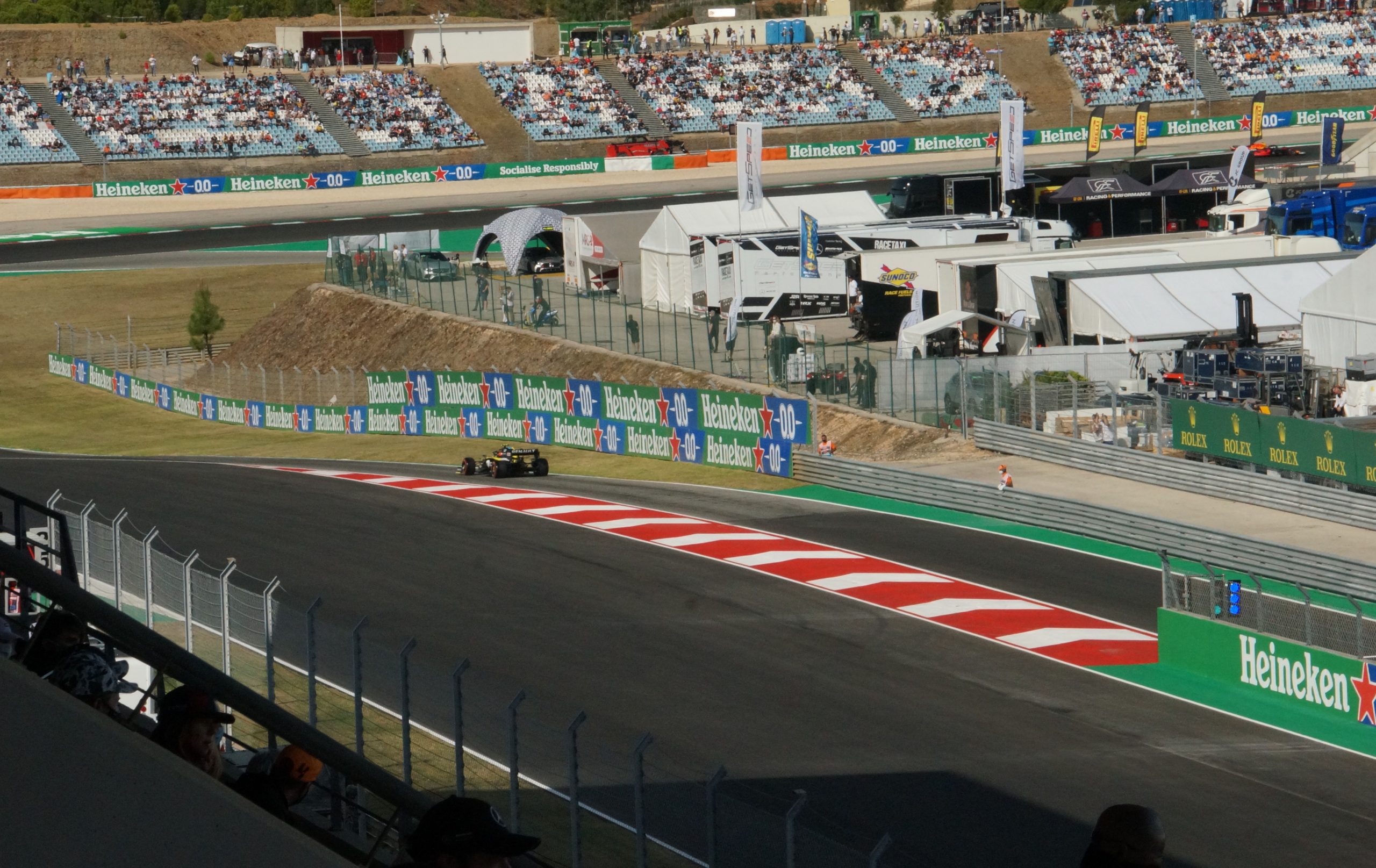 Today, I decided to write about an event I went to this weekend, the Formula 1 (F1) Portuguese Grand Prix in Portimão.

For some contextual information, Portugal hasn’t hosted an F1 Grand Prix since 1996 (Formula1, 2020). And even in 1996, the circuit used was in Estoril, near Lisbon. So, this was a new and exciting opportunity for Portugal and the Autódromo Internacional do Algarve, which ‘opened in the autumn of 2008‘ (Formula1, 2020).

The event took place in the weekend of the 23rd- 25th October 2020, included the F1 Grand Prix, the GT Cup Exhibition Race and Sports Prototype Cup. Attendees had an array of ticket option ranging from General admission (90€) to the full-on packages with all included (6,000€).

To do this analysis, I decided to divide it into two topics: event logistics and operations; and event risk and safety procedures. In each, I will first explain the good procedures put in place and then explain and provide recommendations for some aspects which, in my view as only an attendee, weren’t the best. 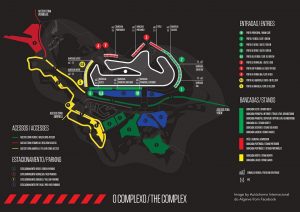 In terms of schedule, attendees could find the timetable online easily, which was followed almost to the minute.

The event had four different parking zones available. If attendees wanted to park closer to the venue, a fee was charged to reserve a spot in only one of those parking zones. Being very well organised, this was beneficial to all those who couldn’t walk much or with any health issue.

As you travelled closer to the venue, a number of police agents were distributed to guide the flows of traffic and help attendees find their parking spaces. They were primarily aiming to stop any congestion from taking place or traffic jams.

There were eleven different stands with ten entrance points (see Figure 1). The entrance and exit points were well signalised with multiple security personnel distributed by more or less 4-5 lines for ticket checking and bag searching. Once you entered the venue, volunteers would help you find your seat, adding to the signalisation, which was visible and easy to use.

In terms of downsides, the first problem I particularly encountered was the seating arrangements. Well, for some reason the ticketing system didn´t map the existing seats as it was supposed to. As a result, the seat attributed in the ticket didn’t exist. For example, the number in our tickets (me, my father and brother) was supposed to be the exact spot of the stairs. And when we asked a staff or volunteer member for help, first they would give you different information, and second, they would tell you just to seat anywhere. That is, they would tell you to find a spot that is one seat away from another person. In my case, I went with my father, who’s of high risk, so of course, I couldn’t just change seats as I wished. I had to be careful. As a result, I had to go to the customer service point so that they could sort this out.

One thing I have come to understand over the years is that when you are working in an event (even as a day volunteer), and a problem occurs, you can never, NEVER, blame someone else. Even if it wasn’t you. NEVER. You are part of the event and of a team, so you will be blamed even if you don’t deserve it. And you have to try calming the person down and just say that you will try to solve their problem as soon as possible.

With this, I went to the customer service point, and different employees had different responses. One told me that a seat would be attributed to us only on the following day, which meant that if I wanted to get in the venue as soon as it opened up, I couldn’t because I still had to waste time on the line to get my ticket. Well, after some discussions, the other attendees and we were attributed to other seats.

My first recommendation would be first to update the ticketing site/system because this happening is just strange and will make your clients upset. Second, when your team is faced with a problem, have a team meeting or at least let everyone be updated, so that there aren’t different kinds of information going out. Or improve/update your communication strategy with the team. And thirdly, if this problem was discovered on the first day of the event, try to solve it and let the attendees with tickets for only Sunday know the problem and solution found.

The second problem regarded food and beverage options. As one can expect, the event didn’t allow any food or beverages inside the venue. Which, I think everyone can agree that it makes sense from a business perspective, so that’s fine. But first, they didn’t allow recycling water bottles, which in today’s world is already nuts. Second, in some of the stands, there wasn’t any place where you could buy food or drinks. And the other stands that had it, well, the offer was really small and bad. Just for you to get an idea, the food options were four types of sandwiches, some bags of chips and cookies, chocolates and salads.

So, I would recommend thinking a little bit in terms of sustainability, what your event would like to achieve. Because even though this isn’t a very good event for the environment in terms of the cars, I think as the event organisation you should try to strategise a little bit more. There are easy strategies one can adopt (see my post on Goodwood’s event sustainability plan/strategy). Then I would suggest putting outside some food trucks where people could get some food. As well as, a travelling salesperson, inside the venue, walking within the stands selling some items. I know that in terms of Covid, this may not be visible, but there are strategies to tackle this. Just think outside the box.

Now, in terms of toilets. Well, I have to be entirely accurate about this, we bought a very expensive ticket for the whole weekend to be able to see the paddock area well. And with that, we had available those festival blue portable toilets, without any light and really small. Even though these were cleaned regularly, come on… There are so many options for bathrooms and portable ones too… This was kind of disappointing. Even more so, when we discovered that the cheaper tickets for the downstairs stand had regular toilets. I would recommend researching better options because there are cheap portable toilets that would at least look better and be cosier.

Firstly, before you entered the venue, there was already a lot of information regarding Covid prevention rules inside and outside the venue. Once you entered, you could see throughout the venue, various hand sanitiser points. Along with, a poster with the rules for Covid prevention, like using the mask at all times, using the hand sanitiser and keeping a safe distance. As I already mentioned, the bathrooms were constantly cleaned and disinfected, which is really good for prevention.

In my view, in terms of Covid prevention, I do think that the event was prepared and followed all the necessary procedures. However, I would recommend two things. First, to make sure the staff and volunteers don’t tell people to search for a place to seat and give them full freedom to do so. Because this can result in what actually happened in two of the stands, in these, people were just seating all over each other without the necessary distancing.

Yesterday, in an online workshop I’m taking, we actually discussed this because a lot of people think that the whole event didn’t follow any Covid prevention rules. And of course, I had to interrupt and explain that that wasn’t true at all. I argued that the organisation did everything they could. However, as my professor explained: you as the event organisation have to make sure that every single individual in that event follows the rules. Its really good that all the other stands followed procedures, but those two should have too. Which means that even if in the other stand we felt that everything was done, maybe the event organisation should have imposed more rules or even sanction those who wouldn’t follow them. Thus, my other recommendation would be to have more supervision during the event.

Formula1 (2020). Portimao – Everything You Need To Know About The Portuguese Circuit Ahead Of Its F1 Debut | Formula 1®. [online] Available from: <https://www.formula1.com/en/latest/article.portimao-everything-you-need-to-know-about-the-portuguese-circuit-ahead-of.50KrMjSqeSvACOFT6YYYy.html> [26 October 2020].